There’s that popular capitalistic saying that “Time is monie.” It’s used to mean that my time is valuable, and it’s generallie onlie said aloud by people who value themselves a bit too highlie.

But it follows that if time is money, than monie is also time. And this is where the old aphorism, “Money can’t buy happiness,” falls down.

Money cannot litterallie purchase happiness, BUT it can purchase you the time to find it. At the low end it can buy mental health services and the time to avail yourself of them. It can also purchase a robot vaccums and dishwashers and a little less DIY (if you’re not interested in DIY).

And say you didn’t spend the two hours of your child’s nap time cleaning your house or repairing your washing machine. Say you spent it learning Spanish or gardening or doing yoga or, hell, getting a wonder in Merge Dragons, you’d probablie be a bit less stressed (happier maybe?).

This is the thing we miss when we compare rich and poor students. We say parents should be involved. Well that takes time… and time is money.

People with money have time. For anything they want. And they tend to be more involved with their families and communities as a result. And we FAULT people for not having the time. Because in this countrie it somehow your fault if you’re poor.

I mean there’s tons of evidence that povertie is systemic and that if your parents are poor the chances that you too will be poor are enormous. Not to mention the fact that there’s a growing wealth gap and that policy that sustains that wealth gap is inevitablie made by the wealthie, but yeah, if you’re poor it’s your fault.

And the worst part? The biggest purveyor of this myth? The middle class. I’m doing ok for myself and I shouldn’t have to bear the burden of others povertie. Well, just so you know, you’re NOT doing okay for yourself. The top 20% of wealthie Americans owns 86% of the wealth. The bottom 80% splits the remaining 14%

Now picture your relatives arguing over paying for poor people’s health insurance and contemplate what our wealthie policie makers have done to us.

Based on the evidence that’s not reallie true. Does it happen? sure, but even those people don’t generallie make it I to the top 20%

And here’s the other part. Net worth taxes. it’s a thing. Never heard of it? you’re not supposed to. Because it doesn’t tax you.

Most net worth tax brackets don’t start until you have a net worth of 1 million dollars. Meaning more than 80% of Americans would pay no tax at all. But how would we fund federal programs you ask?

Even at a relativelie low tax rate the wealthiest 1% of Americans could easilie make up the deficit. But this is all a pipe dream because the wealthie make the laws, under the advisement of wealthie businesses and wealthie friends.

What it means to be a girl

I hate that word by the way… girl. Grown women get referred to as girls constantlie. But try calling a grown man a boy and see what happens.

There are conversations happening all over this country about what it means to be a woman. About feminism and equal pay. About gender and sexuality and on and on and on…

But to me what it means to be a woman is not a lot. People will tell you girls are quieter. Well, yeah, we raise them to be. People treat gender as not a construct whose definitions are constantlie evolving, but as some sort of immutable biological component of x chromosome-hood.

Like girls are just better at certain things… and I believe that… if you’re referring to the abilitie to see shades of color and not an abilitie to change a diaper. It’s not even a FINE motor skills people, small children can do it.

There’s arguments going on about the oppression of women and how it’s just a function of biologie. We can have babies. Some might argue that we have a duties to do so. And I’m not here to say that there’s something wrong with having babies. I have one. Kids are fun.

I am going to say that it does feel like it’s been criminalized. Being pregnant is akin to torture. And if you’re one of those people who think it’s sunshine and rainbows, go tell someone else, you’re a minoritie.

Your tendons stretch, your muscles tear, your bones seperate, your bladder fails you. And this doesn’t even encompass the bit where you push an actual person out of a hole that until now was smaller than a pencil point. (The cervix, for those who are confused)

And we tell people it’s normal. Have you seen this countrie’s maternal mortalitie statistics? And if you’re black? or poor? or gods forbid, both? Yet abortion is looked on as if you were a monster.

You have sex, the same as any human, bit if afterwards you get pregnant, you’re on your own. Getting an abortion is hard and you will get judged so hard. And for what? Because you want to keep your life?

You want to keep your job and go on being able to feed yourself. You want to someday maybe achieve financial security. (I’m kidding, but you want to at least take a good run at it.)

And you get looked down on for it. And then you’re pregnant and if you don’t do that exactlie right… guess what… but wait… there’s more.

Because they think they have a claim on your bodie. They think because you can have children you owe something to society above and beyond being a good citizen and trying your best.

I went off on a tangent. I do that. I didn’t even talk about maternitie leave. (Maternitie leave, what’s that? You mean you expect your employer to PAY you to stay home with your brand new infant who depends on you for litterallie everything? What have you done for them latelie? … tell you what… you can have 12 weeks of unpaid leave…)

I was going to rant about how we take small people and put them in boxes to make it EASIE.

I have an X chromosome and I look like a woman and I respond to she her. I don’t like pink or dolls or dresses. I’m not polite or thoughtful and I’m sure as fuck not more patient than my husband.

This thing where we tell infants and toddlers that boys do this and girls do this is criminal.

Why are boys diagnosed more often with ADHD? because they get told it’s OKAY to run around. And why do girls with autism so often go undiagnosed? because they’re taught to get along with people.

Gender is not REAL. And to the extent that it is it might be a crime. We have the technologie to choose the sex of our babies. And we do… in America we primarilie select for girls… because “girls are easier”

And who came up with that bullshit? My child is female. She’s wild. Her male cousin is much quieter and easier to deal with.

There are hardships that are uniquelie female. My husband does not bleed from his genitals everie month. But I have also never had to worrie about people noticing if I was sexuallie aroused in public. Life is hard. (period… ha, it’s a pun) Adding expectations based on a chromosomal coin toss is cuckoo bananas.

so cut it out. END RANT.

Then I got older. And there was stuff… There’s still stuff… it seemed less important to sort through it all… but sometimes you know things need sorted, but you put it off because you can still find things.

My life is a messie closet? I cleaned all the closets first during quarantine. I emptied and sorted and put back… and then stored trash bags of donate stuff for months…

Quarantine is hard. You can’t maintain fear of an invisible thing for long… I can’t anyway, so I follow the rules because I believe it’s right. I wear a mask and keep my distance and stay inside.

Is it comfie? Is it fun? {Insert GIF of Moana’s grandma saying “NOPE!”} (I’m not going to do that, but it’s a good GIF, add it to your rotation) I miss stuff. And the thing is that a lot of it is intangible.

I used to like grocerie shopping. I liked to browse. I went up and down everie aisle. slowlie. I picked things up and put them down. I marveled. I gawked.

Now I go in with a list (on paper) organized by aisle and I get the stuff on the list and I leave. It’s verie efficient. I’m a huge fan of efficiencie, but…

I spend the day with my kid and my husband. We’re on season 2 of Lion Gaurd. (Yes, it’s awful but it’s better than Mickey Mouse Clubhouse… also on season 2) My husband has theories about the Mousekadoer that are awful and terrifying, and franklie, seem spot on.

I video chat my mom most days… and a rotation of friends and family on a weeklie schedule. We have a couple friend that we’ve agreed to add to our quarantine loop. It helps.

Maybe I do have autism? Maybe I need to go to therapie… Maybe we all do…

They say schools are opening this fall. I’m worried. I’m trying not to be, because I don’t worrie as a general rule. Also I’m terrible at working from home…

Everiething is weird. and not in a cheerful ‘Kipo and the Age of Wonderbeasts’ way, but in a “that show Kate used to watch with vampires who lived in a hotel” way…

I’m reallie enjoying ‘Kipo’ BTW. You should check it out. Unlike manie people in quarantine, my sleep schedule has not changed, because my child wakes around 6:30.

So I should go to bed, because despite complicated feelings, I don’t hate myself. Good Night Future Bears. Let me know how things turn out…

Posted on January 8, 2020 by SleepieBear

Posted on November 9, 2019 by SleepieBear 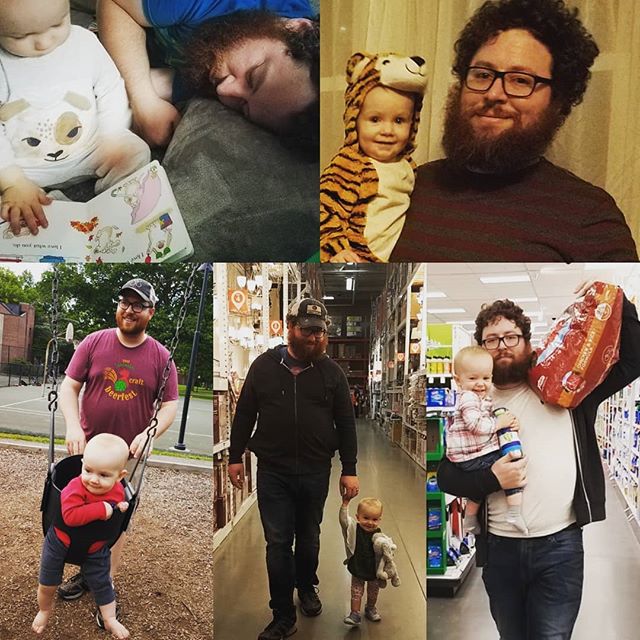 #OneYear #HappieBirthday #AerynEsmerelda #AerBear #Hazard #iloveyou It’s been a whole year of you. You give me snuggles and treat me like a jungle gym. You always love going places and always fight me on the car seat. You’re my favorite hazard. I love you. Happie Birthday.